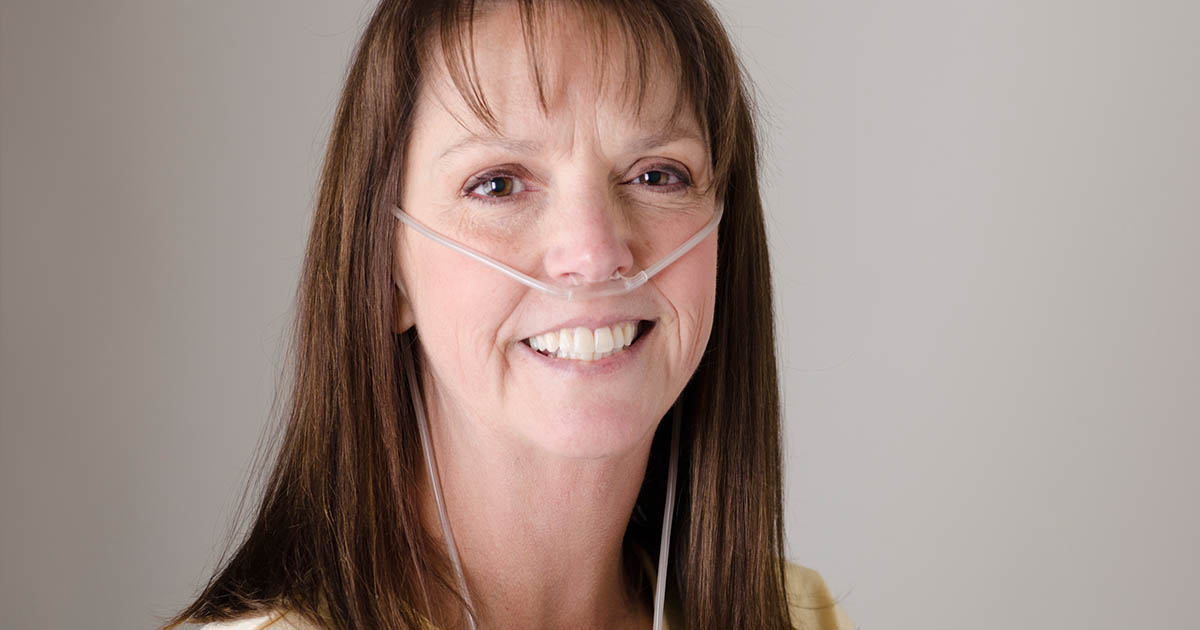 If you have ever seen a patient with an oxygen device and a tube running up to their nose you can safely assume they have lung disease, quite probably COPD. However, in many cases, COPD is an invisible disease as a patient can look quite normal outwardly.

As a COPD patient, I have been fortunate to have competed in many marathons. In each one, I cross the finish line like any other competitor as I have an invisible disability. If I were an amputee, I would stand out due to my disability. COPD is an internal disease and very misunderstood due to this and today; I'm going to answer the question "what does COPD feel like?"

COPD and the Lungs

The airway obstruction makes it difficult for a patient to expel air from their lungs which can cause other issues. Part of the exhalation of air includes expelling carbon dioxide from our lungs.

When a patient has a severe obstruction in their airways, they can experience a build-up of carbon dioxide. The inability to expel carbon dioxide can then result in low oxygen levels in the blood. If untreated this condition can result in damage to a patient’s organs as they are deprived of oxygen.

This process is a common occurrence in COPD patient’s day to day lives, but to outsiders, the patient may not seem ill. This lack of understanding about how this process affects a patient is a significant source of upset for COPD patients.

Observing COPD From the Outside

If you have a family member or friend with COPD, you may well be aware of the limitations they have.

For the uninitiated, there are some signs to look out for which may help you understand the disease a little better. Mouth breathing is common for COPD patients when they’re not feeling at their best. When patients become short of breath, they quite often breathe through their mouths to try and get more air in and out.

Fatigue is often associated with the extra energy of breathing for COPD patients, but to the inexperienced, this is sometimes thought to be laziness.

Early in my diagnosis, I found it near impossible to be mobile for more than three to four hours per day due to the exhaustion I felt from continually being short of breath.

Resting while out for a walk is standard practice if you have COPD. Walking and being active is very good for patients. However, when a patient becomes breathless when out walking, they may need to stop to get their breath back, especially if walking up a hill. Many people see this as a sign of aging or a lack of fitness when it can often be due to lung disease.

How a patient feels usually depends on the severity of their COPD.

In severe cases, it can feel like your head is being held underwater, you can’t come up, and you don’t know where your next breath is going to come from. In this situation as a patient, it’s hard not to panic but panicking is the worst thing you can do.

This is where knowing your condition and how to manage COPD symptoms becomes critical. For most people breathing is taken for granted, it’s something they just do. For COPD patients, it’s something we genuinely value as we have to fight so much for it.

A well-used way of demonstrating what it feels like for the average person to have COPD is a straw test. This is when you place a straw in your mouth, pinch your nose and breath only through the straw. This test is a crude replication of the difficulty a patient can have breathing in and out.

To further demonstrate the difficulties we have in breathing, try walking upstairs when performing the straw test, you’ll soon have an understanding of what a COPD patient has to contend with.

After completing the straw test then think about what it would be like to have to breathe through the straw forever. Now you’re getting some understanding of what it’s like to have COPD!

You May Also Like:Understanding the Stages of COPD: What Does Stage 4 COPD Mean?
Related Search Topics (Ads):

How COPD Impacts You Emotionally and Mentally

So far, we have only dealt with some of the physical challenges; the mental challenges can be just as daunting.

Imagine feeling like this and then being told you have to exercise as it will improve your symptoms. This can be one of the most challenging aspects of managing COPD. Why would anyone who is having trouble breathing want to do something which would make it even harder to breathe?

It’s common for patients to feel embarrassed about their disease due to a perception that if you have COPD from smoking, then you deserve it. The reality is poor lifestyle choices cause many chronic diseases so why compound an already traumatic situation by apportioning blame?

Patients are also embarrassed to be seen suffering. Taking medications or using supplementary oxygen in public is too stressful for some patients. Unfortunately, some of these patients tend to stay at home and become inactive which leads to a decline in their disease.

If you haven’t been diagnosed with COPD, then you can never really understand how it feels to live with this disease. COPD patients don’t want your pity they just want your empathy.